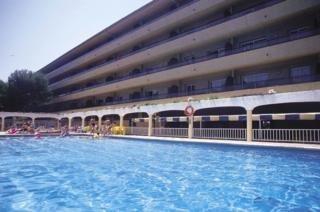 Amenities at the La Pineda Euromar Aparthotel L'Estartit include a private bathroom with a tub and a shower, a mini-bar and a kitchenette. There is a safe deposit box in each room. For entertainment there is cable TV. There is a refrigerator for food storage. Decoration style is modern but with a traditional mood.

This hotel was first built in 1986 but recently renovated in the year 1998. There are 85 apartments spread across 4 floors. The La Pineda Euromar Aparthotel L'Estartit has 4 lifts and a reception desk that is always open. Amenities here include a TV room, a supermarket and a parking facility. There is also an on-site restaurant. Other recreation features include a swimming pool.